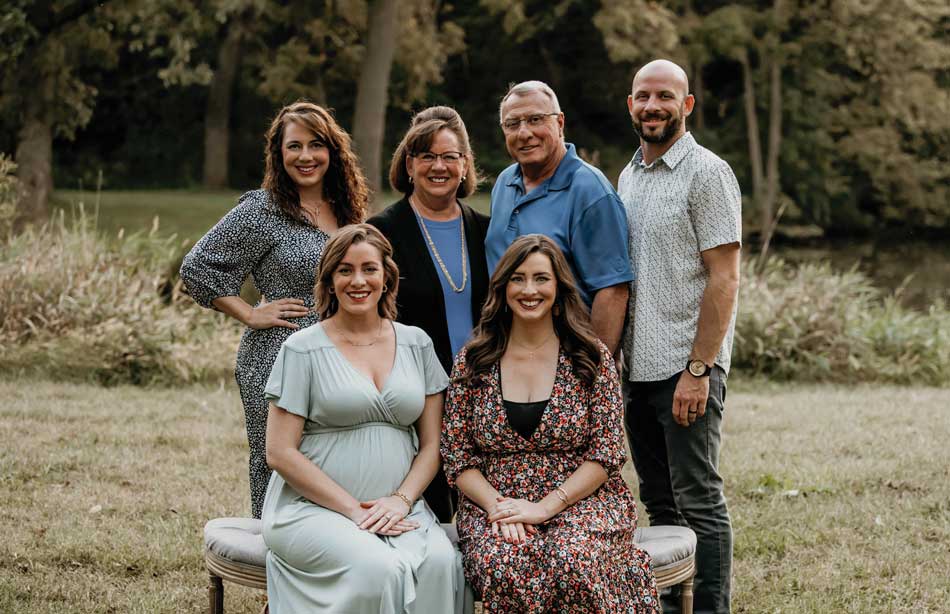 At the Saint Paul VI Institute, we are in the business of hope and healing. With the Creighton Model FertilityCare System and NaProTechnology, we extend to women and couples life-affirming women’s healthcare available in a manner that counters the harmful mentality and practices of conventional medicine.

In 2021, we are celebrating the 30th anniversary of Dr. Thomas W. Hilgers’ NaProTechnology — a women’s health system that provides thorough diagnosis and treatment of the root causes of pain, infertility, miscarriage, infant prematurity, PMS, post-partum depression, and many more.

There have been so many incredible stories of growing families over the decades. For many, their NaProTechnology journey begins after conventional medicine failed them in some way. However, some are able to begin their journey with NaProTechnology because of their knowledge of a friend or family member’s experience. The following stories come from a family whose individual journeys began differently, but all share the common theme of finding hope and healing from the work of the Saint Paul VI Institute.

In the nineteen eighties, during the time when Dr. Hilgers’ was developing the women’s reproductive health system that would eventually be termed “NaProTechnology”, Cathy learned of his work through her employment at the Creighton University Medical Center. After the birth of her second child, she was no longer working outside the home. She and her husband, Sebastian (Subby), wanted to continue building their family. However, they knew this would be difficult due to Cathy only having a single ovarian remnant after complete surgical removal of her left ovary and partial removal of her right ovary. The odds continued to stack against their chances of more children after they suffered a miscarriage.

After two years of unsuccessful attempts to achieve another pregnancy, they reached out to Dr. Hilgers. Miraculously, Cathy and Subby conceived their daughter, Anna, by utilizing blood hormone level monitoring, mucus enhancers, and a complete ovulation ultrasound evaluation. Immediately upon receiving the positive pregnancy test, she started progesterone supplementation — one of the cornerstones of NaProTechnology. In her second trimester, though, the baby was diagnosed with intrauterine growth restriction, a condition where the baby has lower than normal growth. Dr. Hilgers monitored her closely with biweekly ultrasounds. At 38 weeks’ gestation, Cathy was diagnosed with placental insufficiency, a condition when the placenta cannot deliver proper oxygen and nutrients to the baby, and delivery was induced. Anna was born weighing only 4 lb 7 oz but perfectly healthy and able to leave the hospital with her parents two days after delivery.

Cathy gave birth to one more daughter, supported with progesterone and monitored closely by ultrasound due to her previous pregnancy history. They were able to complete their family with four children — Maria, John, Anna, and Gina.
She noted Dr. Hilgers’ compassionate approach and stated, “He was so proactive. He didn’t wait for something to happen. His wisdom gave us hope to accomplish our dream of a larger family. He did all that he could to increase my chances for a successful pregnancy.”

When Maria needed help as a teenager for extremely painful periods and endometriosis, her mother, Cathy, brought her straight to Dr. Hilgers. Maria started charting, and Dr. Hilgers performed a laser removal of her endometriosis by laparoscopy when she was 16 years old. She immediately felt great, but began to have symptoms again as the endometriosis returned and had a second laparoscopy at age 18.

Years later, after meeting her husband, Don, in college, Maria became pregnant. At about 5 weeks’ gestation, she started spotting. When she called the doctor she was seeing at a conventional medical practice, she was dismissed and was told the doctor would not see her until she was 10 weeks along. Maria called Dr. Hilgers’ office which immediately got her in the same day for an ultrasound and to start progesterone pregnancy support. Maria transferred her care to the Institute and carried her daughter, Melina, to full term. Maria reflects on the miracle of her daughter, “There wasn’t anything wrong with her…It wasn’t as if there was an abnormality that she couldn’t survive…It was just me needing help, and I think I would have lost her.”

Maria began her second pregnancy under NaProTechnology care at the Institute. At 7 weeks’ gestation, she began bleeding heavily. It was immediately determined that she had a subchorionic hemorrhage, which is bleeding that occurs underneath one of the membranes surrounding the developing baby. This was watched closely until it resolved on its own. However, at 30 weeks’ gestation, Maria began experiencing pain and contractions. It was determined that she had an infection in her amniotic fluid and was started on IV antibiotics as part of NaProTechnology’s prematurity prevention protocol. She felt great after a couple days and was again able to carry her baby, Anthony, to full term.

May Your Hand Be Upon This Little Life…

Because of her sister’s experience as well as her mothers’, Anna, the third born of the siblings, approached the conventional gynecologist she had been seeing about progesterone supplementation to optimize fertility. Not being trained in NaProTechnology, the doctor prescribed oral progesterone to take daily. Unfortunately, if taken at the wrong time in the cycle, progesterone can work to oppose fertility. This is why the deliberately-timed administration using the Creighton Model FertilityCare System charting as a guide is so important and effective!

The prescription for daily progesterone was a red flag for Anna, so she decided to transfer her total care to the Institute for thorough NaProTechnology evaluation and treatment.

Anna was able to get pregnant, but her first two pregnancies tragically ended in miscarriage. Surgical intervention was recommended by Dr. Kristina Pakiz to try to correct the root cause of Anna’s recurrent miscarriages. She underwent a robotic surgery for laser removal of endometriosis and an ovarian wedge resection for polycystic ovaries using the specialized techniques of surgical NaProTechnology. She was also found to have some issues with hormonal imbalance and thyroid dysfunction. Within a couple months after Dr. Pakiz performed her robotic surgery, Anna and her husband, Neal, achieved a pregnancy with HCG support pre- and post peak to help stimulate ovulation, metformin to balance insulin resistance, and an anti-inflammatory diet. She immediately began progesterone support. Because of her being at high risk for placental insufficiency due to low progesterone, like her mother when she was pregnant with her, Anna was monitored very closely toward the end of her pregnancy.

The level of care they received with NaProTechnology made a big impression on Anna who stated, “During all this, my husband said, ‘Wow, this is pretty amazing that they are really looking so closely at our baby to make sure she is born healthy’…Having gone through our other losses, we are so grateful that they did everything they could to make sure this baby was born alive. Julia’s healthy, and she’s perfect.”

A Loving Welcome to the Girl Next Door…

John, the second born of the siblings, met his wife Carley after she moved across the street from his parents’ home. She started a tradition of hosting an annual neighborhood chili cook-off which helped bring the two together. After three years, John won the chili cook-off and her heart. They’ve been married for two years. Carley had never heard of the Institute’s work before learning of her new sisters’ experiences. “When I initially heard that Anna was going there, I was so grateful that it was such a thoughtful place…When it came to my scenario and having to consider what I would do, it was very comforting to know I could go there and not do something that was contrary to my beliefs. I think that is really important,” she remarks.

Carley and John’s journey with NaProTechnology began with nearly being unknowingly scheduled for the same Creighton Model Introductory Session as his youngest sister. At least it wasn’t a followup session!

As they began charting, the need for a laparoscopic surgery became apparent. Before her surgery, she experienced severe pain and abnormal cycles. What she was experiencing was not just a part of being a woman as symptoms like hers are often dismissed. She underwent extensive surgery by Dr. Pakiz that included NaProTechnology’s adhesion-free techniques including placement of a Gore-Tex membrane. Although she is still in the recovery stage, she has had an improvement in her pain.

We are looking forward to what the future holds for Carley and John. Please join us in praying for many little miracles in their lives together.

The Miracle of Gina…

Gina, the youngest of the four siblings, came into this world as an unexpected but very welcomed miracle to her parents when her mother was 38 years old. She was born despite her parents’ long struggles to grow their family.

After Gina and her husband, Steven, tried for five months to get pregnant, they came directly to the Institute. It was the loving advice Gina received from her mother and sisters that led her to be proactive about her fertility.
They got right to work. Gina began an anti-inflammatory diet, and she began Creighton Model charting and progesterone supplementation right away. She expressed her mindset at that time stating, “We decided to start everything with a positive outlook so that it would hopefully carry over to a positive treatment plan and positive healing.”

She was given a comprehensive diagnostic evaluation including a full hormone panel and ultrasounds to evaluate her ovulation. She was found to have PCOS and endometriosis just as her sister had been diagnosed and was treated by Dr. Pakiz with surgical NaProTechnology including robotic surgery with laser excision of endometriosis, an ovarian wedge resection, and removal of a cyst on her right ovary.

With the help received from NaProTechnology, Gina and Steven conceived their first baby only a few months after her surgery — a baby girl due in February 2022.

“My journey may sound easy, but it hasn’t been easy. It has been seamless, because of the care I received,” Gina said.

Our work to help build families spans generations. Under Dr. Hilgers’ leadership, we will continue to build the infrastructure that provides training for NaProTechnology Medical Consultants, FertilityCare providers, and Saint John Paul the Great Medical and Surgical NaProTechnology Fellows to provide Saint Paul VI Institute services in their own practices. Through these Education Programs, the Institute can reach women around the world to help restore and preserve their health — to provide them with hope and healing.

We are grateful to our supporters, like you, without whom we would not be able to continue expanding the reach of the Creighton Model FertilityCare System and NaProTechnology. Thank you!

There are still many places without access to these services. To help the Saint Paul VI Institute, continue to bring hope and healing to more women and couples, we humbly request your financial assistance. As a 501(c)(3), your charitable contribution is tax deductible and may help lighten your tax burden.

Thank you, again, and may God continue to light your path with gratitude, hope, and charity.