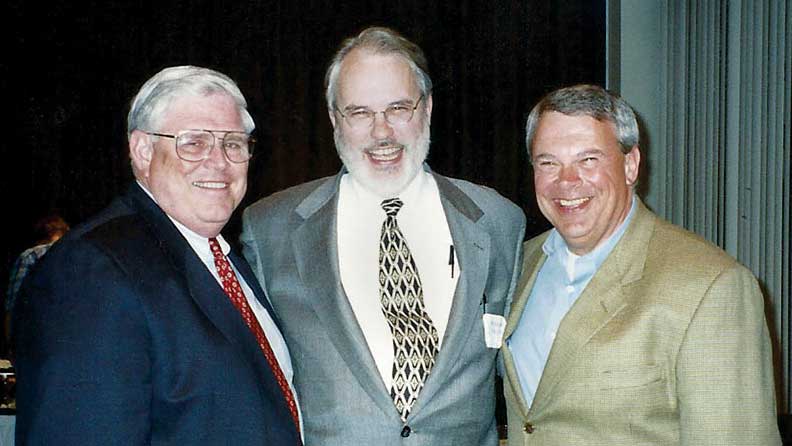 When the CREIGHTON MODEL Fertility­Care™ System was developed we traveled to one another’s homes in St. Louis and Omaha, both Tom Daly and Tom Prebil were there to run errands, get us food, baby­sit the children, and help them stay happy and occupied, as well as maintaining the children’s busy schedules which did not stop during our work. We began at 8 o’clock in the morning and went until the late hours of the night — several days in a row. This type of schedule was entered into for several days at a time and over several months and years. Both were also sounding boards for trouble-shooting different circumstances.

They both warmly welcomed the Hilgers family to stay in their homes when they traveled to St. Louis as the work was being developed. Ann Prebil and Diane Daly often reflected that we could not have done any of this work without the enormous support of their husbands. They embraced the sacrifices we often made — late dinners, childcare while we were doing follow-ups or on-site visits, innumerable phone calls at home (day or evening) from students and clients, different evening programs we needed to participate in, weekend programs, brainstorming with us, etc., etc. Yet these sacrifices were considered minuscule compared to the benefit to their families and their communities.

When Ann and Diane traveled to Omaha, foreign countries, or various places in the United States, their husbands supported the important travel and maintained the families and households in their wives’ absence. They did have the help of parents to accomplish this, and the Daly and Prebil families were forever supportive of this important mission and the ultimate development of the CREIGHTON MODEL Fertility­Care™ System and the new women’s health science of NaProTECHNOLOGY® as it spread over six continents.

WITH REGARD TO TOM DALY

Tom Daly supported Diane from the very moment she said yes to Dr. Hilgers’ invitation to work on the initial research team. It was not in their plan that she would work outside their home to such a great extent, but Tom felt that Diane had particular gifts that suited her to this work and that God was calling her to a special apostolate/profession. From their initial commitment to Humanae Vitae at the beginning of their marriage, while all their friends were contracepting, Tom and Diane felt a calling to help couples live the Church’s teaching on reproduction to offer an alternative to the contraceptive mentality and to help build strong families. When Diane served as the first President of the American Academy of Fertility­Care Professionals, Tom “bragged” that he was the “First Husband.”

As an inner-city high school principal, Tom saw many of the consequences of strained family life and worked to assist the teams in that situation and to resolve to help build strong families in many ways, including support of Diane’s work in FCS. He had and continues to have a special heart for the children with learning and other disabilities and works from a strong pro-life ethic. He has attended almost every annual meeting of the AAFCP, has given numerous talks with Diane and cheered her from the audience when she was presenting alone. When schedules or circumstances were challenging, he would always say, “Diane, you have to do this. You have so much to offer.”

WITH REGARD TO TOM PREBIL

Tom Prebil, for many years, was an attorney, but was eventually named by the Governor of Missouri to be a judge and does arbitration law currently. With that background, he was able to contribute to the legal dimensions of the CREIGHTON MODEL System and authored an important paper early in our work on the importance of the Follow-Up Form and its documentation regarding the potential legal ramifications of work in this area. We are all fortunate to say that the work of the CREIGHTON MODEL System has never been the subject of a lawsuit in its over 40 years of existence.

Tom has been extremely supportive to this work effort during our many years where we work so closely together. We still consider him as a close friend.

So, one of the questions that is often asked is why is it that the men involved in this were all named “Tom?” Were the “Three Toms” in this work like Thomas Aquinas or the Doubting Thomas? I can say that they never doubted the beauty of the CREIGHTON MODEL System and never doubted their wives’ contribution to the development of the CREIGHTON MODEL and prayed for the wisdom of Thomas Aquinas in our work. As can be imagined, I personally was both an advocate for St. Thomas Aquinas as well as a Doubting Thomas. As a scientist, I had certain questions that I needed to get resolved and that came out through the research that we did and we did together with Ann, Diane and, of course, my wife Sue.

So it can be finally said that I personally believe that it is fair to say that without Tom Daly and Tom Prebil, the spouses of K. Diane Daly, RN, CFCE and Ann M. Prebil, BSN, CFCE, along with Sue Hilgers and their ongoing support to the CREIGHTON MODEL System and eventually NaProTECHNOLOGY®, we would not be where we are today. Their contributions were enormous and extremely important, and I personally cannot thank them enough for what they did to advance this work.